Our American ship of state has been set on a perilous and unpredictable course by events not in our direct control.  Our founders, guided by a firm vision of individual freedom based on Natural Law Rights, created a system of government that protected the sovereignty of each person and their state of residence.  It was a simple system of divided authority with checks and balances that promised and ensured a “live and let live” society in which the inalienable rights of the individual could be protected and secured.

It was designed to be a distinct and definitive contrast to, and a repudiation of, the Old World system of titled, arrogant, elitist rulers who had enslaved most of humanity for centuries.  The US Constitution even forbids the granting of titles of nobility.

If the words of our founding documents had been adhered to, the American Ideal of Freedom would still be a reality instead of a fading memory.

Our founders, themselves men of faith and moral character, understood that long term survival of the Constitutional Republic they created required the active involvement of an informed and moral citizenry.  Anticipating the challenges we would face, the framers gave us tools to preserve individual rights without preventing necessary changes.  Unfortunately, they could never have anticipated the relentless and continuous battle being waged by the ousted monarchy to take back what they view as rightfully theirs.  We are now in the final stages of that war, and the enemies of freedom, smelling victory, are speeding full bore towards the finish line.

In the past, I have written several articles that deal with the principles that protect us from tyranny and how they have been subverted to steal our nation from us.

In “The War of Coastal Aggression”, I discussed how, as a nation, we are divided along geographic and philosophical lines in a similar manner to the decades between 1828 to 1860, leading up to the War Between the States.  Today, the geographic divide is coastal versus interior and urban versus rural.  The absolute and deep philosophical conflict is between the INDIVIDUALISM of the constitutional conservative against the COLLECTIVISM of the global elite and their brainwashed useful idiots.

In “The Bitter Fruit of Group Identity”, I discussed how identity politics has created a bitterness in our society.

Aggravated and abetted by a biased media and the political elite, the citizens of our nation are now divided, usually without their consent, into identity groups based on identifiable characteristics used to serve a political agenda. At its worst, guilt for the misdeeds and sins of any single group member is forced upon all group members whose unified apology and punishment are demanded. This is the very antithesis of our inseparable founding concepts of individual freedom and personal responsibility.

In “The Democracy Deception”, I wrote:

Most people who use the term “Our Democracy” do not understand the constitutional system that limits the power of our federal government.  Democracy is mob rule in which an entire group is controlled by 51% of its members.  By a simple majority vote, the rights of any individual or the entire group can be altered or eliminated and new rights invented and conferred.  Decisions concerning the life of each member are made by the majority based on group needs not the desires or wishes of the individual.

The United States is a Constitutional Republic. Our Constitution limits the power of both the federal government and the states, specifically preventing any governmental entity from abolishing the Natural Law Rights of the minority, even a minority of one.

Given the fragility of the union under the Articles of Confederation, the loyalty of citizens to their own state rather than to the federal government, and the opposition to being ruled by an overpowering central authority, any contract that did not offer a reasonable balance of power among the states was doomed to rejection.

In other words, having just ousted a monarch, how difficult a task would it have been to convince the six smallest states to agree to a Constitution in which they would have virtually no say in the selection of the federal executive?

Two hundred forty-four years after the Declaration of Independence our nation is so deeply divided that peace can only be achieved if one side capitulates or is totally vanquished.  Individualists would have to agree to cede control of their lives to the government and give up the liberties and protections in the Bill of Rights.  The Collectivists would have to agree to take responsibility for their own lives, abide by the Bill of Rights, and stop trying to force everyone to live by their socialist world view.

Individualism, at its core, is based on the divine gift of sovereignty to each person.  Its foundation is the compendium of Natural Law Rights by which one may decide the course of one’s own life and accept the consequences, good or bad, of each decision.  Collectivism defines rights as belonging only to the group and subjugates each member to group authority.

These differences cannot be reconciled by discussion or compromise.  Which of your constitutional rights are you willing to give up?  The answer, of course, in none.  To do so, would mean becoming a slave to the group or the government.

This entire conversation becomes even more critical when one realizes that the activists and zealots in the modern Collectivist movement are merely pawns on the globalists’ chess board.  Like Stalin’s “useful idiots”, they are expendable.  The elitists are investing billions of dollars to reach their goal of one world governance.  If they fail, their lives go on as if it all never happened.

Against this backdrop, we have all seen obvious believable evidence of voter fraud that gave victory in the November presidential election to a career politician with criminally dirty hands whose party does not hide its plans to eviscerate the Bill of Rights and impose a collectivist tyranny on all of us.  Over 70% of those who voted for the incumbent president believe that he won and that the victory was stolen by fraud and deceit.

America can only remain united as one nation if the judges and justices in our legal system have the courage and wisdom to abide by the words of our Constitution and live up to the ideals of our founders.

In this interview, Dr. Dan and Bob will discuss the constitutional and Electoral College requirements for electing the President. 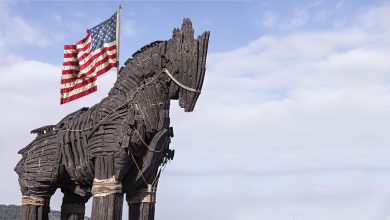