In 1859, Charles Darwin’s “On the Origin of the Species ” challenged the Judeo-Christian belief that God created the heavens and the earth, animals, and man.  Darwin’s theory was based on observation and examination of organisms that were in existence at that time.  He had no knowledge of genetics, DNA, mutations, or any of the other scientific tools we have at our disposal today. 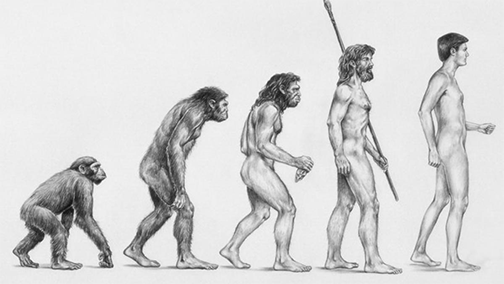 Darwin’s theory is based on the concept of “Natural Selection” which can be defined succinctly as “Survival of the Fittest.”  For Darwin, the goal of every member of a species is to propagate the species; i.e., to reproduce more individuals.  Random changes in body structure that give one member of the species a greater chance of survival are  passed on in the hereditary line until all, or most, members of the species have that same advantage for survival.  For example, a species that survives by outrunning its predators gradually gets faster over time, individually and as a group, since only the fastest runners survive to reproduce.

Using modern scientific advances, proponents of evolution claim to have identified supportive evidence found in the fossil record, genetic studies using DNA, and other comparative anatomical observations.  Achieving iron-clad scientific proof, however, is an incredibly difficult task and one that is virtually impossible to achieve.  The evolutionary process, even according to its believers, occurred over tens of millions of years.  Investigations, in essence, must work backward in time trying to find evidence that is most likely no longer existent.

Having spent a great deal of time with America’s youth in the classroom, Author and national speaker William James Herath realized that the ambiguous definition of evolution, based on bits and pieces of often questionable “science,”  left a cavity on the faith of many of his students.  To better understand and address their concerns, Herath began to educate himself on the conflict between Darwin’s theory of evolution and biblical scripture, and, through his own research, discovered some shocking information and facts forming the basis for his book What is Evolution.

You won’t want to miss Freedom Forum Radio this weekend with Dr. Dan and William Herath, author of “What is Evolution” and national speaker on the subject of evolution and creationism.