Many might be surprised to learn that the word “Democracy” does not appear in the Bill or Rights or the US Constitution.  Nor does it appear in the Constitutions of the 50 States.  A Democracy is “mob rule,” a dictatorship of the majority in which 51% of the citizenry rule the other 49%.  Our freedoms and liberties are guaranteed to us because the framers of our Constitution, through past experience and careful consideration, gave us a Constitutional Republic, not a Democracy . . .  A governmental system based on the rule of law and not the rule of the majority.

After the War of Independence and the failure of the Articles of Confederation, when our Constitution was being conceived and written, the total population of the thirteen colonies was estimated to be 2,628,400. The thirteen colonies were not equal in terms of number of inhabitants, with Delaware being the smallest at 45,400 residents and Virginia the largest with 538,000 residents.

Although there was a degree of “national” identity, each colony was unique in philosophy and culture that reflected the origins of its inhabitants and their relative difficulty or ease of establishing a viable living in the New World. The primary allegiance of a colony’s citizens was to the colony itself, not to any central government or to “outsiders,” both of whom would have been regarded with some degree of mistrust.

Having just ousted an oppressive autocrat, the colonists had no desire to reestablish another monarchy in its place. The Articles of Confederation failed for just that reason. The individual colonies were unwilling to cede authority to a federal body sufficient to exercise any degree of rational control. The colonies behaved like a schoolyard filled with mischievous adolescents at recess without adult supervision. Our founders, in their wisdom and through hard-fought negotiations, were able to create a document that did find that “sweet spot” between anarchy and tyranny to form a functional central government.

The Founders wanted to empower democratic elements in the American system, but they recognized that constitutional protections for each individual citizen’s Natural Law Rights and freedoms could only be guaranteed in a republican form of government.

That compromise was based on limiting the central government to powers that were enumerated, tasks that could be performed better by a single unit, and obligations that promoted the general welfare of all equally. It was also dependent on each colony having enough control over the central governmental entity to maintain its own sovereignty.

The United States Constitution achieved these goals for the colonies with the enumerated powers in Article I, Section 8, the equality of power in the Senate, and the Ninth and Tenth Amendments. Protection for individual rights is guaranteed by the creation of a constitutional republic not a democracy.

The choice of the executive was philosophically a difficult compromise. The Constitution creates three equal branches of government with an inherent separation and balance of powers so that no one branch can act alone. The President and Vice President, however, are the only officials selected nationally without loyalty or allegiance to a specific colony. The population disparity, therefore, had to be considered in a way that preserved the necessary equality of power.

Acceptance of the new Constitution by all of the thirteen colonies was not at all assured. The written records of the ratifying conventions in each of the colonies reveal the division among the citizens who feared a central government so powerful that the rights of the states and their inhabitants would be eclipsed or eliminated.

These numbers are estimates, as the first “national” census was not carried out until 1790. Nevertheless, it would have been obvious to the citizens of the colonies that any national election would be dominated by five or six of the largest colonies even though they represented a minority of the parties to the constitutional contract.

Given the fragility of the union under the Articles of Confederation, the loyalty of the citizenry to colony over federal government, and the opposition to any overpowering central authority, any contract that did not offer a reasonable balance of power among the colonies was doomed to rejection.

In other words, having just ousted a monarch, how difficult a task would it have been to convince the six smallest colonies to agree to a Constitution in which they would have virtually no say in the selection of the federal executive?

The election of 2016 is an excellent example of how the votes, concerns, and opinions of citizens in “fly-over” country were protected by the Electoral College. 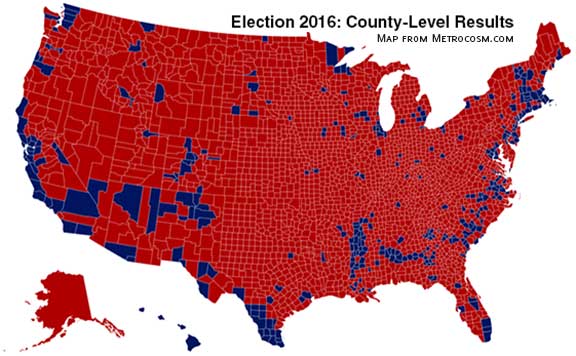 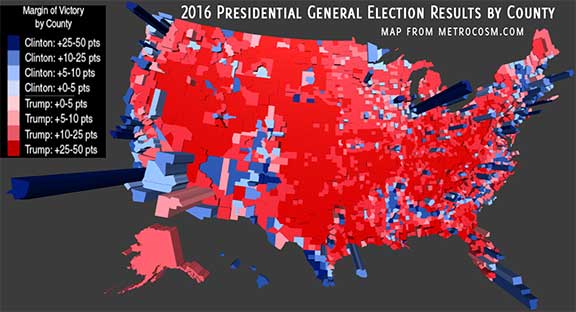 A democracy would allow the blue areas to dominate the red areas since their combined population is greater.

It has been reported that Donald Trump won 3,084 of the 3,141 counties in the USA.  Although those exact numbers have been disputed, it is clear that President Elect Trump did win a huge majority of the counties, most of them in the vast central land mass area of the country and most of them rural or less densely populated than the urban and coastal areas.

Were it not for the Electoral College, small densely populated, mostly urban areas on the east and west coasts would have elected Hillary Clinton instead of Donald Trump. The votes of the inhabitants living in the vast central land mass of the USA would have essentially been of no value, and the needs, opinions, and desires of those citizens would have been ignored by a President who owed them no loyalty. In fact, it would be possible for a candidate to win the election by campaigning only in those highly populated east and west coast areas without setting foot anywhere in between. That egregious lack of equality would lead to a dissolution of the country with unfortunate and disastrous results.

Regardless of your politics or opinions about Donald Trump, Hillary Clinton, Bernie Sanders, or any other contender, this is about the process that guarantees the sharing of power fairly in the selection of the our national executive and, ultimately, preserves our constitutional republic.

On Monday, December 19, 2016, we will again witness for ourselves the genius and necessity of the Electoral College as envisioned by our founders.

Plato and Madison both understood that justice and liberty for the minority is possible only when power is shared between groups in society.

If you have ten minutes, take the time to watch this simple but educational video produced by the John Birch Society covering the history of our America republican form of government.  To watch the video, click HERE.

As Sir Winston Churchill said, “The best argument against democracy is a five minute conversation with the average voter.”

On Monday, December 19, 2016, we will again witness for ourselves the genius and necessity of the Electoral College as envisioned by our founders.