There was a time when the pulpits of our nation were on fire.  The church was the center of a community, a house of worship, meeting place and social venue, its clergymen the righteous and moral leaders.  In addition to the teachings of the church, pastors were educators who had the means and ability to share the same messages of faith and moral values to all citizens of the community whether child or adult.

As far back in American history as the 1600s, faithful pastors have preached the word of God as it pertained to all aspects of life, including politics, shaping families, culture, communities, institutions, and government, based on biblical teachings and Natural Law Rights that come from God by dint of our humanity.

For America’s early pastors, ‘Right and Wrong’ were absolutes, defined for mankind by the divine hand that carved the Ten Commandments in stone during the Israelites’ Exodus from Egypt.  It was this written document given to us by God that codified and set forth the Rule of Law that God intended for His people.

Using the Bible and its Divine Word as a reference, ministers were often responsible for drafting documents that instituted and secured rights and freedoms for their colonies, provided protections for the people, and placed imitations on government.

The Pilgrims in Massachusetts looked to their Pastor John Robinson for guidance in structuring a representative form of government that included a Bill of Rights.

Massachusetts Bay Colony, at the direction of its ministers, set up a representative form of government followed by a Bill of Rights.

Establishing a representative form of government for the Colony of Rhode Island, Reverend Roger Williams explained:

. . . the sovereign, original, and foundation of civil power lies in the people.

Clergymen established Connecticut’s representative form of government based on these biblical principles:

We lay a foundation for after ages to understand their liberty . . . that they may not be brought in bondage but by their own consent, for we put the power in the people.

Legislation was vested in a single assembly elected by all the inhabitants; the elections were to be by secret ballot; the principle of “No taxation without representation” was clearly asserted; freedom of conscience, trial by jury, and immunity from arrest without warrant were guaranteed.

Each subsequent colony was established upon the same Judeo-Christian principles of governance.

Sermons from the pulpit often included messages pertaining to liberty and tyranny and the imperative of protecting the first and defending against the second.  Courageous and patriotic pastors did not hesitate to come out from behind the pulpit, take up arms, and stand alongside their congregations to fight battles in defense of the very cornerstones of America . . . faith and freedom.

So passionate and bold were the American clergy 150 years prior to and during the time of the War of Independence that the British nicknamed these men the “Black Robe Regiment,” a reference to the black robes they wore, holding them accountable for American independence. 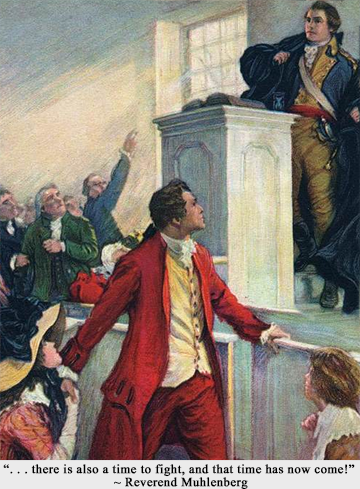 In 1776, during the War of Independence, one such member of the duly named Black Robe Regiment was Peter Muhlenberg.  Muhlenberg was a pastor at a church in Virginia who was asked by George Washington to raise the 8th Virginia Regiment. Muhlenberg, in black cleric robe, stood in front of his congregation and began his sermon with Ecclesiastes 3:

He paused, glanced about the room over the faces of his congregation, and pulled open his robe to reveal a soldier’s uniform beneath.  He went on to finish his sermon:

. . . there was a time for all things, a time to preach and a time to pray, but those times have passed away. There is a time to fight, and that time has now come.

The next day, Pastor Muhlenberg formed the foundation of his regiment with hundreds of volunteers, many of whom were from his own congregation.

Another of the Black Robe Regiment was Reverend Jonas Clark.  When Paul Revere arrived at the home of Reverend Clark in Lexington, he told John Hancock and Samuel Adams, both of whom were waiting with Clark in his home, that the British were coming.  Both men turned to Clark and asked him if he thought the people were ready to fight.

Reverend Clark quickly replied, “I have trained them for this very hour!”

J.T. Headley would later write, “There they found their pastor the Rev. Clark who had arrived before them. The roll was called and a hundred and fifty answered to their names . . . . The church, the pastor, and his congregation thus standing together in the dim light awaiting the Redcoats . . . “

“Let us stand our ground; if we die, let us die here. Stand your ground Harry! Your cause is just and God will bless you.

Other Patriotic Pastors (but not all) of the Black Robe Regiment included:

Through their spoken words, actions, and writings, Christian ministers of America’s past have had a significant influence on instituting and securing many of our rights and liberties, and early colonial documents establishing republican forms of government laid the groundwork for the US Constitution. 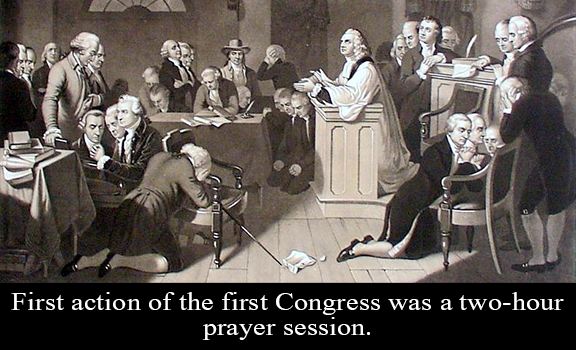 When tasked with drafting the Declaration of Independence, Thomas Jefferson looked to Reverend John Wise for inspiration.  Reverend Wise was an outspoken opponent of governmental overreach who was arrested at one point for refusing to submit to unjust governmental demands.  Reverend Wise went on to preach about liberty and tyranny and wrote:

The consent of the governed is the only legitimate basis for government. God created all men equal and every man must be acknowledged by the state as equal to every man. Taxation without representation is tyranny.

After the Constitution was signed, a Philadelphia citizen asked Ben Franklin, “What have you given us?” His famous response was, “A Republic, if you can keep it.”

Reflecting on that verbal exchange in light of the abysmal divide of our nation today, one would rightfully ask, “What went wrong? Where did we go astray?” As it so often does, history suggests an answer to those questions.

Morality is not arbitrary. It is not shades of gray.  It is not a line in the sand whose position and very existence shifts and fades with the winds and weather conditions of life . . . As citizens, as leaders, we pale by so many measures in comparison to our founders and the citizens of the thirteen colonies who, as men and women of faith, understood the certainty and obligations of Judeo-Christian morality.

The success and longevity of our constitutional republic, defined for us in our founding documents, the Bill of Rights and the US Constitution, was always dependent on the moral character of our people and our leaders.

Is there still such a thing as the Pastor Patriot with the courage to step out from behind the pulpit once again to serve as a guiding light to a nation in need?

Dr. Dan’s guest on Freedom Forum Radio this weekend is Dan Fisher, Pastor of Liberty Church, two-term Oklahoma State Congressman, and creator of the acclaimed presentation “Bringing Back the Black Robed Regiment.”  Over the years, the presentation has developed into a masterful stage production, complete with full period costume and actual relics from the War of Independence.   Discussions will include the biblical principles of liberty, truth, government, and the church.

Pastor Fisher grew up in Arkansas and felt God’s call to the ministry at a very early age. By the time he was 23, he was already serving as a full-time pastor. Forty-one years after preaching his very first sermon, Dan continues to serve in the ministry as the senior pastor of Liberty Church, Yukon, OK. He and his wife, Pam, have been married for 35 years and have two children and four grandchildren.

Throughout his life, Pastor Fisher has believed that Christians cannot compartmentalize their lives into the “secular” and the “sacred,” but are called by Jesus to be “salt and light” in every area of society – including government.

Cycles of History Ignored – “I was only following orders”