Two hundred twenty five years ago, the leaders of our nation came together to form a new government. They were very different from the rulers of their day who were mostly egotistical narcissists of limited intellect – kings, queens, and other assorted monarchs who viewed themselves as gods and behaved as such.

In contrast, our founders understood that the Natural Law Rights they called “unalienable” were divine in origin. They clearly defined individual sovereignty as a God-given, not a government-fabricated, right. The compact they created, our Constitution, obligated government to protect and secure those rights to each sovereign citizen.

Any discussion of the internal strife that divides our nation today must begin with an understanding of the legal facts that govern the relationship between our federal government and the individual states and their citizens. If one studies the words of our Constitution using a dictionary of that time, the federalist and anti-federalist papers, and the minutes of the state ratifying conventions, it will be evident that our founders created a nation based on the principles of personal responsibility, private property rights, free market economy, and very limited central government. Thomas Jefferson and his fellow patriots would most assuredly view our current federal government as a tyranny no less oppressive than that of King George.

The Constitution is a contract agreed to by thirteen separate sovereign entities. For that reason, the federal government in its entirety (that is all branches, agencies, and bureaucracies) is not a party to that contract but subject to constitutional limitations on its authority. It has been the stated and vigorously pursued goal of progressive statists for the past one hundred years to discredit and destroy that legal barrier to the centralization of power in order to supplant individual freedom with tyranny and to replace obedience to God’s Law with subservience to the law of man and his government.

The Declaration of Independence clearly states our founders’ belief that God’s Law must be the basis for a just government and that it is the duty of free citizens to alter or to abolish a government that departs from and ignores the constraints and requirements of God’s moral code.

We hold these Truths to be self-evident, that all Men are created equal, that they are endowed by their Creator with certain unalienable Rights, that among these are Life, Liberty, and the Pursuit of Happiness – That to secure these Rights, Governments are instituted among Men, deriving their just Powers from the Consent of the Governed, that whenever any Form of Government becomes destructive to these Ends, it is the Right of the People to alter or to abolish it . . .

When a people themselves live by God’s Law and are guided in their actions by a firm understanding and acceptance of right and wrong, maintaining a similar level of morality in government is not an impossible task.

Unfortunately, the innate imperfection of Man is too often displayed by greed and a lust for power that infects those who we send to govern us. In those instances, only a moral citizenry, strengthened and supported by an actively vocal clergy, can act as a deterrent to the collapse of moral law and society.

But what if the church is silent? What if the clergy doesn’t draw a clear line in the sand to define in bold terms right versus wrong?

Simply put, when that occurs, we have what America has become today. There is no longer a demarcation line between good and evil, only a gray zone in which individuals define the boundaries of their own morality.

When our citizens lose their moral compass and the church is not holding our collective feet to the fire, how can we expect the government to adhere to the limitations and obligations demanded by our Constitution?

Our founders knew where they were going. They traveled on a straight and narrow path to that goal.

So many of us today have no clue where we are headed and lack the moral guidance required to find our way.

I am reminded of the lyrics of a song written and sung by Balsam Range, a blue grass group from Haywood County:

“If you don’t know where you’re going, any old road will take you there”

For our nation to survive, individually and as a society, we must once again accept and agree to live by the moral code that served as the basis for our Constitution. 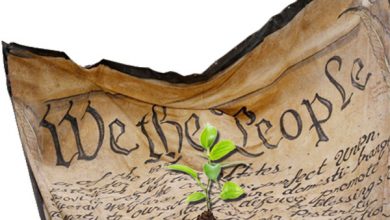