Historians have incessantly warned us not to disregard the lessons of history lest we repeat failures that could have been avoided.  That indisputable admonition is commonly found in childhood parables, writings of scholars, clever sayings of gurus, and advice from our parents and elders.  Nevertheless, humanity has habitually and often flagrantly ignored the obvious realities of past misdeeds regardless of how costly or disastrous.

A true retrospective examination of mankind’s history, however, teaches us a valuable lesson.  Not everyone disregards the past.  Evil never sleeps.

After the end of World War I, Europe was in turmoil.  The rise of Communism in Russia under the leadership of Lenin and Stalin led to similar uprisings among socialist groups in Europe.  Initially, German culture prospered under the progressive policies of the Weimar Republic, but competing extremist groups, a starving populace, and eventually the Great Depression created political conditions ripe for Hitler’s rise to power in 1933.

As the Nazi regime increased its dictatorial hold on Germany, Jews, non-Aryans, and other “undesirables” were subjected to a variety of repressive laws, restrictions, loss of employment, and forced relocations.  In 1938, the Jewish parents of a 17-year-old student in France were exiled to Poland by the Nazis from the family home and business in Hanover, Germany.  The student, Herschel Grynszpan, in a state of extreme anger and agitation, shot Ernst vom Rath, a German diplomat in Paris, who died two days later.  Adolph Hitler, incensed by the killing, attended the funeral.

On Hitler’s return to Germany, Joseph Goebbels, the Nazi Minister of Enlightenment and Propaganda, used the incident to inflame Hitler’s Storm Troopers into an anti-Semitic fury.  As a reprisal, Goebbels ordered a wave of wanton violence against Jews in Germany and Austria.

The Nazis called it Kristallnacht, the “Night of Broken Glass”.

Starting in the evening of November 9, 1938, lasting into the next night, Jewish synagogues, homes, schools, cemeteries, and businesses were vandalized, set on fire, and destroyed.  On the order of Goebbels and Gestapo Chief Heinrich Mueller, the nationwide pogrom was engineered to look like “spontaneous demonstrations”.  Local police were forbidden to interfere with the looting, burning, and killing.  In fact, they were told to arrest the victims.  Firefighters were told not to extinguish the fires unless Aryan property was threatened.  Over 200 synagogues were destroyed, almost 100 Jews were murdered, and more than 30,000 Jewish men were arrested and taken to concentration camps.

The First Amendment to our Constitution prohibits Congress from “abridging the right of the people peaceably to assemble, and to petition the Government for a redress of grievances.”  The right to assemble peacefully and confront their elected officials is absolutely essential to hold government accountable for its actions.  It serves as a reminder that, in a free society, the moral authority to rule is derived from the consent of those governed.  As the seat of federal power, Washington, D.C., has seen numerous large, peaceful gatherings of concerned citizens determined to influence federal officials and voice their concerns for the direction and future of the nation.

Martin Luther King’s March on Washington for Jobs and Freedom on August 28, 1963, the 100th Anniversary of Abraham Lincoln’s Emancipation Proclamation, endures as a powerful and moving moment in American history.  Well organized and peaceful, over 200,000 people gathered at the Lincoln Memorial to protest for an end to racial discrimination and for a complete and equal participation in the American society for all regardless of skin color.  Subsequent bipartisan support led to passage of the Civil Rights Act of 1964 and the Voting Rights Act of 1965. 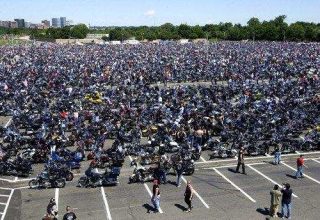 Starting with 3,000 motorcycles in 1988, Rolling Thunder became a national motorcycle ride the Sunday of Memorial Day weekend in Washington, D.C. to protest the lack of government accountability for Vietnam War soldiers still either Missing in Action (MIA) or living in Vietnam as Prisoners of War (POW).  The annual peaceful event grew to an average of 350,000 – 750,000 motorcycles each year for the ride from the Pentagon parking lots around the National Mall to the Lincoln Memorial.  The Missing Service Personnel Act of 1993, a POW/MIA postage stamp, and the Respect for America’s Fallen Heroes Act of 2006 were the group’s accomplishments.

On September 12, 2009, an estimated 1 million members of various Grassroots, Tea Party, 9-12, and other conservative groups marched on Washington to protest the socialist big-government agenda of newly elected President Obama.  Concerns about taxation, federal spending, abortion, and government takeover of healthcare fueled the protest.  The march achieved its goal of a conservative takeover of both houses of Congress in the 2010 election.

Each of these protest marches were successful attempts to influence government policy in a peaceful manner as sanctioned and encouraged by the First Amendment.  Without violence and destruction of property, groups of private individuals accomplished their desired goals.

In contrast, the violence, wanton destruction of private property, and injury to innocent people by Antifa, BLM, and other anarchist groups in America’s cities this past several years was sanctioned, ignored, and even encouraged by local governments.  Although these marches and protests were often organized and attended by legitimate groups, the events were taken over by outside agitators who were very well prepared, funded, and organized.

This cycle of urban violence in America today is unfortunately not haphazard or accidental.  It has been purposefully put in motion by the contemporary version of the perpetrators of the original Kristallnacht.  Cellphone video reveals the Brown Shirts of Nazi Germany now dressed in black breaking storefront windows, looting, and setting fires without fear of arrest.  Buildings and even police precinct stations burn to the ground without attempts to extinguish them.  Like the killing of the German diplomat in Paris, the violence in our cities cannot be considered a legitimate retaliation for the instigating event regardless of how malicious it may have been.

Vandalism, arson, and bloodshed in areas of cities and towns that are normally safe for recreation and commerce causes fear in normal people.  Business owners, who pay taxes and license fees, expect protection from property damage and the lawless activity that scares off their customer base.  The exodus of businesses and their customers is a root cause of unemployment and subsequent dependency on government benefits.  And, as always in history, tyrants require a designated scapegoat who is demonized for standing in the way of restoring peace and tranquility.  For the Nazis, the Jews were the enemy of progress toward a greater Aryan society.  The signs and chants of today’s organized violent agitators clearly identify their chosen scapegoats.

These are all the Tools of Tyranny, expertly used by our domestic arrogant elite globalists to destroy confidence in America and its existing government in order to replace it with a one-world collectivist tyranny they control.  By forcing us to be dependent on their largess for our very existence, they expect all of us, like sheep, to obediently enter their re-indoctrination camps like the Jews in Nazi Germany.

A true retrospective examination of mankind’s history teaches us that not everyone disregards the past.  Evil never sleeps.  Lesson Learned.