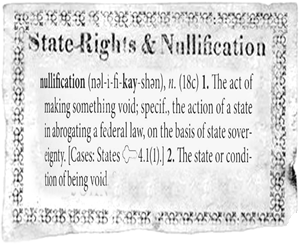 Eight friends, going out to dinner, are arguing about restaurant choice.  Each has their own favorite cuisine and chef.  Decision time arrives, and one of the eight, let’s name him Alpha-1, unilaterally selects the restaurant and time.  The other seven, with little further discussion, acquiesce.  Alpha-1 is “Sovereign”.  He exerted his ultimate authority to make a decision that was obeyed by the others.

Individual sovereignty is the essence of personal freedom.  A colonist is, by definition, not sovereign, as he owes allegiance and obedience to whichever authority “owns” his colony.  Having successfully rebelled against the King of England, a solitary sovereign, our Constitution’s framers inverted the pyramid of power by investing each individual, not any government entity, with definitive sovereign authority.  Any power given to the state and federal governments was considered to be strictly limited and definitely “on loan” from that sovereign individual.

Our Constitution codifies this hierarchy of authority.  Each state is a sovereign entity made up of sovereign individuals.  Our nation is a federation of sovereign states, created by the Constitution, which is a compact ratified by those individual sovereign states.  The federal government, as the creation of that compact, is most definitely not an equal partner.  If one reads the proceedings of the ratifying conventions of the states, it is clear that the intent was to severely limit the powers of the federal government to those specifically listed in Article I, Section 8.  The individual states, not the Supreme Court, had the authority to determine if the federal government exceeded its authority, and, as sovereign entities, could remedy the usurpation of power by nullification, interposition, or even by secession.

With a firm knowledge of American history comes the understanding that nullification is, as Jefferson stated, “the rightful remedy whenever the government violates the Constitution”.  The Tenth Amendment specifically gives that power to the states and their citizens.  Furthermore, there is no article, clause, or amendment in the Constitution that in any way abridges or eliminates that right.

Nullification of legislation and regulations contrary to the Constitution is the absolute duty of the governments of the sovereign states who derive their authority for such action from their sovereign citizens.

With the federal government continuing its expansion well beyond its constitutional authority, nullification remains our best legal remedy to preserve individual freedom.

Dr. Dan (Eichenbaum) spoke recently at the Nullify Now Conference in Raleigh, NC, on October 19, 2013.  As a speaker and sponsor of the conference, Dr. Dan was able to interview influential author Dr. Tom Woods, syndicated talk show host Mike Church, Mike Maharrey of the Tenth Amendment Center, and writer Publius Huldah.  The interviews and speeches from the conference will be broadcast on Freedom Forum Radio and will appear as audio and video podcasts on DrDansFreedomForum.com.

The first interview, included in this newsletter, is with Dr. Tom Woods, Jr., noted author, lecturer, and member of the prestigious Ludwig von Mises Institute.  In the interview, Dr. Dan and Dr. Woods discuss the concept of individual sovereignty as it relates to nullification.  The radio interview will air on WJRB 95.1FM and on the Internet beginning Saturday November 2, 2014.

Sovereignty and Nullification (part one) 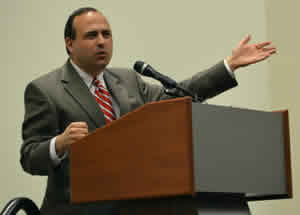 Nullification: How to Resist Federal Tyranny in the 21st Century. A senior fellow of the Ludwig von Mises Institute, Woods holds a bachelor’s degree in history from Harvard and his master’s, M.Phil., and Ph.D. from Columbia University.

For eleven years Woods served as associate editor of The Latin Mass magazine; he is presently a contributing editor of The American Conservative magazine. A contributor to six encyclopedias, Woods is co-editor of Exploring American History: From Colonial Times to 1877, an eleven-volume encyclopedia.

Woods lives in Topeka, Kansas, with his wife and four daughters.