That was both theory and reality to those who wrote our Constitution and to the delegates to the state ratifying conventions who agreed to join the constitutional republic, the federation of sovereign states that was created thereby.

All that remains today is an historical account of that theory. The rights “guaranteed” to the states and their citizens have been stolen by constitutional amendments (14, 16, and 17) and the Federal Reserve Bank which, by institutionalized blackmail, has forced the states into economic submission to the federal leviathan.

The concept of “Defiant Nullification,” both used and accepted by our founders, is easily defeated by the withholding of the federal funds that, after having been taken by force from individuals by the IRS, is needed to fulfill the mandates of the federal government.

In 1997, however, one Supreme Court decision produced a powerful tool for state and local governments to nullify unconstitutional federal actions. Printz vs. The United States clearly affirmed that the federal government cannot force state and local governments to assist or perform tasks necessary to enforce federal law. The case involved a demand by the federal government that Texas sheriffs perform background checks required by the Brady gun control legislation. They refused, and after the lengthy legal process their decision was upheld.

The concept is simple. The federal government does not have the personnel and resources to enforce its laws, rules, and regulations without the cooperation of local authority. While the feds may target a single state or county to coerce compliance, it becomes a numbers game when multiple local entities, acting in concert, refuse to assist and comply.

As the current administration continues to act through executive fiat in so many unconstitutional endeavors, we must make a concerted effort to support practical nullification by state and local government officials. We are living in times not at all unlike the decades that preceded America’s War of Independence. The specific government offenses and techniques may differ, but the actions of the elitist tyranny that sparked that conflagration in 1776 are not that different than those imposed by the professional political class that constitutes the oligarchy that rules America today. Rights and Freedoms, taken so slowly that few notice their absence, can only be retained and, hopefully regained, if the states and their citizens act with the sovereign force they are entitled to wield in defense of the Constitution and Liberty.

Practical Nullification is our best hope to begin the battle.

Join Dr. Dan as he welcomes back noted author Michael Maharrey. Part one of this interview airs this weekend, June 13-14, on WJRB 95.1 FM and streamed live over the Internet. Part two airs June 20-21 and part three airs June 27-28. All programs are available by podcast following air time here. 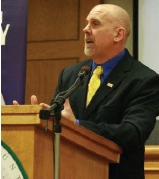 Michael Maharrey serves as the national communications director for the Tenth Amendment Center and the executive director for OffNow.

Michael Maharrey earned a B.A. in Mass Communications and Media Studies from the University of South Florida St. Petersburg. Mike has covered local and state politics for several publications in both Kentucky and Florida, and won two Kentucky Press Association awards as a sports writer in 2009.

Mike currently produces web content for a Lexington television station and is author of Our Last Hope: Rediscovering the lost path to liberty, a book about the concept of constitutional nullification as a means to rein in out of control big government and usurpation of states’ rights and liberty.

A native Kentuckian and an adopted Floridian, Mike currently lives in Lexington with his wife and three children. A long time hockey player, he is equally passionate about protecting and preserving the Constitution and keeping pucks out of his net on the ice.