Imagine living in a world where a ruthless dictator is aware of your every move, the secret police is constantly harassing you, the law that you were commissioned to uphold is twisted and corrupted, the lives of your children are threatened, you are wrongfully imprisoned time and time again, your friends are asked to speak against you, and your family has disowned you – all for speaking the truth about God and defending fellow Christians.~Virginia Prodan

Then one day the inevitable happens.  As your law office is about to close for the day, a tough muscular man posing as a client sits down at your desk.  He opens his overcoat and pulls out a pistol.  Pointing it directly at you, he says, “I have been sent from the government to kill you.”  Could you ever imagine that your best and only hope for saving yourself was by saving your assassin?

The realities of life in a socialist dictatorship behind the Iron Curtain used to be well-known to the majority of Americans of all ages.  The Union of Soviet Socialist Republics, the USSR, was the arch enemy of our United States and a threat to our very existence.  In a worldwide turf war, the USSR attempted to spread the socialist revolution to vulnerable emerging nations.  Russia’s goal during the “Cold War” was to isolate the USA politically and to encircle us with countries loyal to the USSR and hostile to our interests.  Russia financed and supported small local revolutions to overthrow legitimate governments friendly to the USA that were often ruled by unpopular dictators.  We were then forced to send military aid to support unpopular tyrants against people seeking freedom from oppression.

The biggest threat for children of that era, however, was the threat that Russia would attack our homeland with nuclear missiles.  It was routine in schools to have periodic air raid drills that involved ducking under the desk, crouching against an interior wall away from the windows, or even going into shelters for protection against nuclear bombs.  This fear was accentuated when Americans watched on television as Communist Leader Khrushchev pounded his shoe on the lectern at the United Nations yelling out the unmistakable threat, “We will bury you.”

As tensions thawed, cultural exchange began to occur.  Russian ballet groups, dance troops, and orchestras started touring in the United States, always sequestered in hotels at night and accompanied by Russian KGB agents.  Newspaper stories followed each visit about Russian performers who would escape and beg for political asylum.  There was also live video of an East German shot while trying to escape to find freedom in West Berlin.

Inevitably, the American people learned about the economic and social failures of Socialism in Russia.  Horror stories about starvation, political imprisonment, Siberian prison camps, torture, and murder were widespread and became well-known.  Slowly, the Russian people learned the previously censored truth about American lifestyles and freedom from the Voice of America radio programming and television signals that the Soviet regime could not block.  Regional revolutions began to break out that eventually led to the collapse of the USSR and freedom for its people.

Americans of that time period had a front-row seat from which to observe the abject and total failure of socialism and the USSR.  The mass starvation, torture, and murder necessary to hold the Russian population captive while the socialist elite led lives of luxury was evident to all.  Most understood that socialism and the socialist economic system inevitably leads to economic failure, corruption, and tyranny. 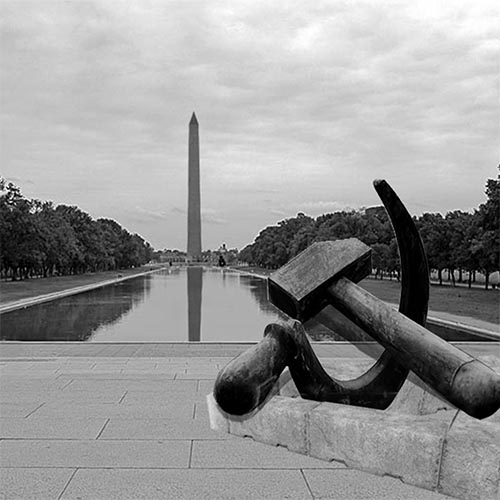 Having won two world wars and defeated “Godless Communism,” most Americans just wanted to raise their children peacefully in the greatest country on Earth.  Beneath our noses and below our awareness, the Marxist Insurgency continued its relentless war on America and the American Dream.  By design, they infiltrated our culture, destroying the American family, Judeo-Christian morality, our public education system, and the health of the manufacturing and energy sectors of our economy.  Two generations of children and young adults now learn the romantic view of socialism taught by former “flower children”, now teachers and professors, using a leftist curriculum from which history and the discipline of logical thought have been slowly eliminated.  Sitting back with blinders on has become very dangerous to our way of life.

This is our wake up call.

Dr. Dan’s guest on Freedom Forum Radio this weekend is Ms. Virginia Prodan, noted author of Saving My Assassin, her personal life story.  Ms. Prodan grew up in Communist Romania where she became a lawyer defending Christians against attempts by the government to eradicate them and Christianity by any means.

I should be dead, buried in an unmarked grave in Romania.  Obviously, I am not.  Apparently, God had other plans..~Virginia Prodan

Living in constant fear while completely relying on God for protection culminated in one fateful moment. After being psychologically wounded and physically exhausted, Virginia let her guard down as a member of the secret police entered her office with a mission to kill her. The events that transpired late that evening inspired the title of her book, “Saving My Assassin,” and captures the transformative power of God’s message to His creation.

Virginia was eventually granted political asylum by U.S. president Ronald Reagan. In 1988, she was exiled to America with her family to discover political and religious freedom that she was never allowed to enjoy in Romania. The destination was Dallas, Texas, where Virginia continues to work today as a speaker, international human rights attorney, author, and victory coach, while staying committed to protecting important freedoms in America.

To read more about Ms. Prodan, checkout her website.