Government bureaucracy has grown so large and powerful that ordinary citizens lack both the political power and the legal financial resources necessary to protect or regain their constitutionally guaranteed rights and privileges. As a result, nameless, faceless bureaucrats make rules and regulations by which we must live and, because they are not elected by anyone, they are untouchable by the voters.

On the surface, these regulations purport to be necessary to make our lives better, safer, more efficient, and to protect us from any and all of life’s challenges. In reality, these regulators are the busybodies in your neighborhood who try to tell you and everyone else how to behave and what to do. Most of us would rather do that for ourselves.

In the 2016 election, Donald Trump promised to clean up the swamp known as Washington, DC. From his extensive experience in real estate and construction, he had first-hand knowledge and experience dealing with excessive and costly government regulations that delay progress in all ventures and cost businesses millions of dollars. President Trump embarked on a massive effort to get rid of these worthless obstructions to economic growth. His success in doing so is one of the primary reasons that our nation’s economy is growing faster than at any time in modern history.

President Trump’s deregulation actions have served to unmask the even greater depth of the swamp and its grip on the workings of government at all levels. It has allowed us, We the People, to appreciate the enormity of the task ahead of us if we want to change our country’s course back toward a true free market economy and restore individual freedom.

The ugly truth is that the goal and agenda of the Swamp and its overreaching bureaucracy is to eliminate the sovereignty of the individual and incarcerate all of us, except the ruling class of course, in the “Eternal Hell” of a Democratic Socialist Collectivist tyranny of the arrogant elite, one world governance.

As individuals, we have been sitting on the couch too long, and it is time to rise up and retake the birthright given to us by our founders.

With these thoughts in mind, I introduce you to Jim Chilton.

Out of necessity, Jim Chilton has spent most of his recent life as an activist for property rights. He is at war against flawed and illogical environmental regulations such as the Endangered Species Act and various Clean Water Regulations. Now the property rights and physical safety of citizens like Jim Chilton and his family, who live on our international border with Mexico, are being threatened by yet another failure of our federal government. For decades, Congress has been unwilling and unable to enact strong protection of our international border with Mexico to stop the entry of illegal aliens, drugs, terrorists, and felons into our nation. Congress must enable the Border Patrol to control the border at the border itself so that citizens in that area can enjoy the safety guaranteed to every citizen by the US Constitution.

Jim Chilton and his wife Sue are 5th Generation Arizona ranchers. In 1888, Chilton family ancestors arrived in Arizona driving several hundred head of cattle. The first Chilton Ranch was established near the pioneer town of Livingston, along the Salt River, where Roosevelt Lake is now. Jim and Sue Chilton’s 50,000-acre ranch is adjacent to the town of Arivaca and continues south to the international border with Mexico. The ranch includes private property, state school trust lands, and two federal grazing permits on national forest lands.

The entire family is blessed to be able to live preserving our western ranching customs, culture, and heritage dating back to pioneering ancestors who entered Arizona Territory in the late 1800s. We have been in the cattle business in Arizona for about 120 years and have a long-term view of the necessity to be excellent stewards of the grasslands we respectfully manage.  ~Jim Chilton

Jim Chilton has testified before Congress multiple times about issues with the Endangered Species Act and Clean Water Acts. Jim’s ranch extends to the southern border with Mexico and includes four miles of actual border that is marked by a regular cattle fence consisting of five strands of barbed wire. The ranch house has been burglarized twice by drug packers and neighbors have been robbed and even killed by drug packers and the cartels. Jim and his wife live with weapons near their bed, at the doors, in their vehicles, and attached to their riding saddles.

Jim Chilton has not been sitting on the couch.  We all need to get off the couch, stand by his side, and follow his lead and become activists for property rights and individual freedom. 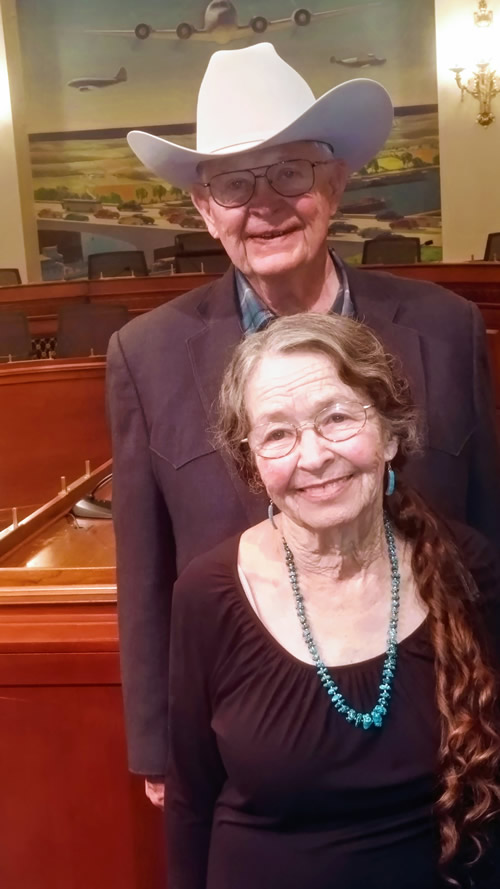 Dr. Dan’s guest on Freedom Forum Radio this weekend is Jim Chilton, owner of the Chilton Ranch & Cattle Co on the border in Arizona.  Chilton will share his battle with government bureaucrats and environmentalists attempting to eliminate cattle grazing.