Who owns your body?

If asked this question, most of us would quickly shout, “I do. I own my own body.” And YES, you would be correct. Each of us owns his or her own body. It is a direct gift from God, and along with it comes the complete package – Natural Law Rights that are divine in origin.

If we ask this question from an historical perspective, however, regardless of your beliefs and God’s presumed intentions, your answer would at best be only partially accurate.

For centuries, humanity was ruled by kings and queens, princes and princesses, dukes and earls whose needs and whims were imposed on their subjects for any selfish reason imaginable. The monarch confiscated property and money and instituted all measure of punishments, including torture and death, by his simple word even in the presence of legal systems designed to administer fair and equal justice to all.

Simply put, the monarch owned all property including the body of each of his subjects and all those who resided within his realm.

How fortunate that our founders, having defeated the tyrant King George, understood the concept of Natural Law Rights. They created a legal contract, our United States Constitution, that protected and secured those rights for each and every individual.

To our founders, your personal property included your land, your home, your possessions, the work of your hands, the ideas of your brain, and your life itself. Each individual was granted personal sovereignty with freedom of choice and free will, accompanied by the requirement of being responsible for the choices he or she makes. The Constitution further created a system in which Natural Law Rights, enumerated in the Bill of Rights, were guaranteed to each citizen, even a minority of one.

By force of our Constitution, no individual, alone, in a group, or by the using the force of government, is allowed to diminish, reduce, alter, modify, or eliminate the guaranteed and enumerated rights of any other individual whether he be in a group or by himself. 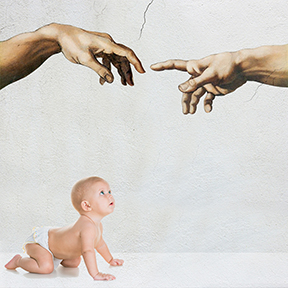 Unfortunately, that is no longer the case in America. The rights of individuals are violated daily in so very many ways, and we allow this absolute violation of God’s Law to happen at our peril.

The murder of millions of innocent babies in their mothers’ wombs through abortion must be considered our nation’s most shameful, willful, and unconscionable obliteration of an individual right – the right to be alive.

In 1973, the Supreme Court established a woman’s legal right to an abortion with the decision of Roe v. Wade. The major portion of the written opinions, for and against, dealt with the issue of when life begins. The science of genetics in that era was still in its infancy. The justices relied on historical references for the purposes of the legal opinion which generally proposed that a fetus was considered “alive” when the mother felt fetal movement (quickening).

Because of today’s incredible advances in genetics and molecular biology, however, it is possible to make a logical and cogent argument, medically defensible, that life does indeed begin at conception.

Each individual person is genetically defined by his or her DNA, the chemical basis for every single cell in a person’s body. That genetic blueprint is absolutely unique for each individual to the point that DNA can be used legally to identify and convict criminals. Since half our DNA comes from each parent, it is undeniable that the union of the male DNA and the female DNA produces fertilized cells whose genetic composition is similar to, but nevertheless dissimilar to the DNA of either parent. Clearly, the molecular result is a separate living organism, albeit in an immature form, that is defined by the unique chemistry of its own unique DNA.

When a woman claims to have the right to do anything with her body that she wants, I wholeheartedly agree. The problem is that the baby growing inside her uterus, regardless of its size or shape, is a distinct and separate individual, defined by its DNA, who has all the divine rights of life from the moment of conception.

Yet this killing of the unborn through abortion is still sanctioned by our government, upheld by the courts, and even championed by those who claim the moral high ground on many other issues.

Throughout the history of mankind, other societies have denied the divine origin of life. In ancient Greece, Plato believed that a human being’s only purpose for living was to serve the Greek empire. Imperfect babies could be killed up to five weeks of age and people over 45 only received palliative medical care. In both these instances, the decision to terminate a life or withhold care was related to the patient’s minimal or declining usefulness to the collective Greek society.

Hippocrates, a physician, believed that human life is divine in origin and a physician’s duty was to protect life from conception to natural death. That is the origin of the Hippocratic Oath, until recently, part of the graduation ceremony in every medical school.  Fortunately for all of us, Hippocrates won that battle, and, except for occasional lapses of medical ethics, medicine has fulfilled its obligations to humanity as prescribed in the Hippocratic Oath.

At its core, this is a moral battle between individual rights and collective rights, which, centuries later, is now raging in our own country.

. . . the complete lives system produces a priority curve on which individuals aged between roughly 15 and 40 years get the most substantial chance, whereas the youngest and oldest people get chances that are attenuated.

Dr Peter Singer wrote a book called Should the Baby Live in which he advocates infanticide at the discretion of the parents, in consultation with a physician. Singer wrote in an excerpt from Practical Ethics “Taking Life: Humans“:

Killing a disabled infant is not morally equivalent to killing a person. Very often it is not wrong at all.

. . . when circumstances occur after birth such that they would have justified abortion, what we call after-birth abortion should be permissible.

The philosophy of these two physicians, a doctrine they share with Plato, Nietzsche, and Adolph Hitler, now appears in our time as the philosophical basis for socialized medical care programs and the justification for abortion, assisted suicide, and infanticide. These immoral concepts, justified for the betterment of the collective society, are now being considered by state legislatures and even enacted into law.

Wake up, America. Morality is not a choice. It is a necessary part of any just society to guarantee the individual freedom and Natural Law Rights of its citizens.

Dr. Dan’s guest on Freedom Forum Radio this weekend is Maria McFadden Maffucci, President and editor of the Human Life Review (Human Life Review) located in midtown Manhattan, New York. She is a writer, speaker and has been actively involved in the prolife fight since the 80’s.

Mrs. Maffucci’s articles and editorials have appeared in the Human Life Review,  First Things, National Review, and on her recently launched Newsmax blog “Devoted to Life” where she writes about cultural and prolife issues.  Her latest commentary focuses on what really happened at the March for Life with the Covington boys.

Mrs. Maffucci is a native New Yorker who was raised in the upper-east side of NYC.  She earned a BA in Philosophy from Holy Cross College, has been married to Robert E. Maffucci for over twenty years, and is the mother of three children.

The Human Life Review is the only publication of its kind in the world: a journal devoted to life issues, primarily abortion (William F. Buckley once praised it as “the focus of civilized discussion of the abortion issue”), but also “neonaticide,” genetic engineering, cloning, and fetal tissue experimentation, as well as the end-of-life issues of euthanasia, assisted suicide and suicide. The Review also publishes articles dealing with more general questions of family and society: what the “abortion mentality” has done to our culture; how moral relativism has pervaded our political process as well as our educational system; and how the debates over day care and the children’s rights movements, as well as the controversy over health care and end-of-life decision making, reflect a society sharply divided on the most basic moral questions.

If you want to read more from the Human Life Review, online and hard copy subscriptions are available for a small charge from its website.