Guns in the hands of individuals, clearly protected by the Second Amendment and the writings of our founders, present the greatest single threat to tyrants . . .  And they know it.

Armed with a fabricated “crisis” and false myths about personal gun ownership, America’s political elite and their media sycophants are pushing again for legislation to disarm and endanger law-abiding American citizens.

The socialists in charge of our government’s executive branch will stop at nothing to achieve the total disarmament of every American citizen.  These elitists know that the only way they can establish a collectivist utopia in our country is to create a subservient, dependent, and disarmed citizenry, unable to challenge the edicts of a tyrannical federal government . . . That is the mission as part of their hundred year war against the Constitution and the individual freedom it protects. 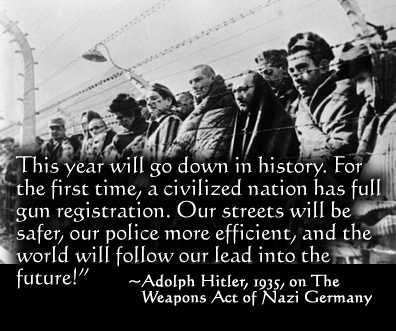 In 1935, Adolph Hitler said, “This year will go down in history. For the first time, a civilized nation has full gun registration. Our streets will be safer, our police more efficient, and the world will follow our lead into the future.”
Three years later, armed with that list of every gun owner, Hitler’s storm troopers confiscated those guns. From 1939 to 1945, a total of 13 million Jews and other “undesirables” who were unable to defend themselves were rounded up and exterminated.

Gun confiscation has always been a prelude to slaughter, as proven by the fate of the Jews in Hitler’s Germany, the “useful idiots” in Stalin’s Russia, the educated in Pol Pot’s Cambodia, and the peasants in Mao’s Red China. Millions of dead innocents bear silent witness to consequences of disarming law-abiding individual citizens.

Many years ago, when I was became a commissioned officer in the Navy during the Vietnam era, I affirmed the following oath:

I do solemnly swear that I will support and defend the Constitution of the United States against all enemies, foreign and domestic; that I will bear true faith and allegiance to the same; that I take this obligation freely, without any mental reservation or purpose of evasion; and that I will well and faithfully discharge the duties of the office on which I am about to enter. So help me God.

That oath enrolls me in a brotherhood with millions of others before and after me who have similarly sworn to support and defend the source document of our individual freedom rather than any government official.

Taking that Oath is not a pointless technicality. It is not a meaningless paragraph to be recited as a condition for a job.

The Oath is a statement of allegiance to the basic principles and the Natural Law Rights from which our individual freedom is derived.

As a member of OathKeepers, I am reminded that, once taken, the Oath NEVER expires! I am not afraid to state publicly that I am prepared to uphold that Oath.

Towns County (Georgia) Sheriff Chris Clinton will be Dr Dan’s guest in a three-part discussion of the potential impact of proposed federal anti-gun legislation on his job as county sheriff and on you as a citizen.

The interview with Sheriff Clinton will provide critical insight into how a law enforcement professional, guided by moral and constitutional principles, views this threat to our individual freedom.

Listen Live on the air at 95.1 FM or on the Internet at WJRB.

The interview will be available as three separate podcasts on (website) after the final program is broadcast.

An Armed Society is a Polite Society

An Armed Society is a Polite Society